The simple mediaeval kirk was easily rearranged for Reformed worship. The altar against the east gable was removed and a pulpit in the middle of the south wall became a focal point of the building. There would probably be only a few seats but a long table and benches would be brought in when the Sacrament of the Lord’s Supper was observed. Worshippers would sit down at the Communion Table in relays entering by one door and leaving by the other.

It is likely that at some point the original mediaeval church was heightened and this meant that buttresses and pillars had to be introduced to support the walls and roof. The reason for the change was probably the insertion of lofts at each end of the church for the accommodation of the “heritors” or landowners. It was in this church that the Rev. James Grainger ministered and in which he concealed the Regalia. 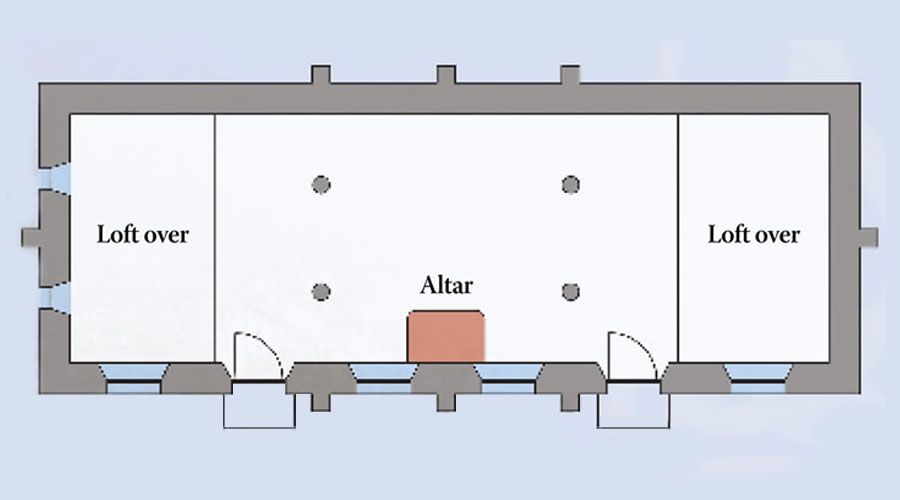 His account of this episode tells us that the floor of the church was partially paved. The present church bell dates from 1679 and bears the inscription “Pieter Ostens Te Rotterdam” indicating its Dutch origin. The initials MJH on the bell are those of Master James Honyman, minister of the parish 1663-93, the first of four generations who were successively minister of Kinneff. A monument commemorating this clerical dynasty can be seen on the left side of the pulpit.

Next : The Rebuilding of the Kirk in I738

Back : The Mediaeval Kirk